Kerala history is closely linked with its commerce, which in turn was wholly dependant until recent times on its spice trade. Kerala was known for its spices and traders travelled here to trade and to gain control over this rich land. It is believed that the spice trade dates back three thousand years. Pepper still remains the king of Kerala's spices, but the state also has a very rich produce in cardamom, cinnamon , nutmeg, ginger and tumeric.The state is the spice capital of the world. Over twelve varieties of spices including ginger, garlic, cardamom, vannilla, pepper, cinnamon, coffee, tea, clove and nutmeg is cultivated in Thekkady and its neighbouring villages. 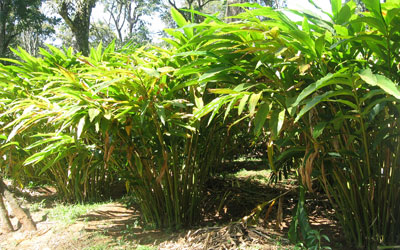 A cardamom plant normally starts bearing fruit from the third year of planting.

The harvested fruit are rubbed on wire mesh and polished before they are graded and stored in polythene-gunny bags to retain the green colour and to avoid exposure to moisture. 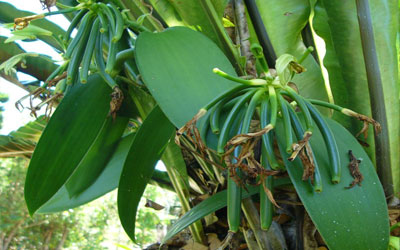 The rostellum of the flower is pushed back with a pointed bamboo splinter and the overhanging anther is pressed against the stigma with the thumb, thus smearing pollen over it. The ideal time for pollination is 0600 to 1300 hrs.

A tropical orchid, this requires a warm climate with frequent rains. Vanilla grows best in uncleared jungle areas where it can get filtered sunlight. A creeper, the plant requires support up to height of about 135 cm. The plant usually begins to flower by the third year. The bean takes 10 to 12 months to reach full maturity. 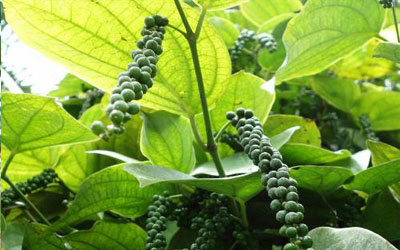 The pepper plant grows best in a warm and humid climate. Berries mature and are ready for harvest in about 180 to 200 days. Black pepper is produced by sun drying the mature pepper berries for 3 - 5 days after they are separated from the spikes by threshing and white pepper by retting mature berries in clean water for 5 - 7 days, removing the outer skin and drying the seed after thorough washing.

Upopened flower buds are carefully picked when they turn from green to pink.

The buds are then allowed to dry for 4-5 days till they become crisp and dark brown in colour. 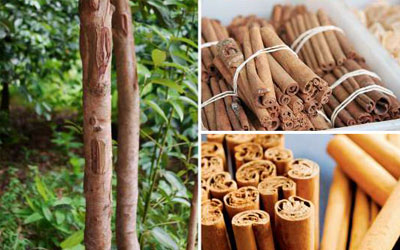 Harvesting is done twice in a year - in May and November. The bark of the cut down shoots are split on the day of harvest itself and dried in the sun for 2 - 5 days. The dry quills or bark are packed in bundles for trade. Leaves and tender twigs are used for extraction of oil by distillation. 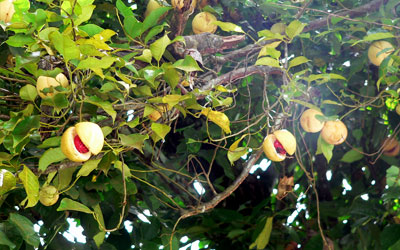 Scientific name: Myristica fragrans
Temperature: 20°C – 25 °C
Rainfall Required: at least 60 inches
Important Varieties: Vishwashree, Konkan Sugandha and Konkan Swad.
The Nutmeg tree bears fruit throughout the year, but peak harvest season is from December to May. The nuts split open when the fruits are fully ripe. After de-husking, the red feathery aril (mace) is removed, flattened out and dried in the sun for 10 - 15 days. The nuts are dried separately for 4 - 8 weeks till the kernels rattle within the shells.